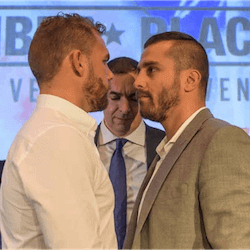 All kinds of rivalries played out in the Billy Joe Saunders v David Lemieux fight in Canada. A middleweight world title on the line, and an undefeated English boxer fighting a French Canadian in Quebec? They have 250 years of fractious relationships to build on…

It’s a fight that stymied Aussie boxing fans trying to pick a winner, because all the experts reckoned it could go either way. And that isn’t pure sports-reporter flannel designed to disguise an inability to pick a winner: heading into the Saturday-night fight in Laval, Quebec’s Place Bell stadium, even the bookies couldn’t make up their minds.

Both fighters were dead even in the betting, priced at $1.90 to win. In Draw No Bet stakes, WBO champion Saunders edged ahead to $1.82, with IBF champion Lemieux at $1.99 despite the expectation of a fiercely partisan, poutine-spitting crowd behind him.

Both Fighters Talking the Talk

There wasn’t much to separate the two in the trash-talking stakes, either. Both at pre-fight press conferences and on social media, the pair had been talking each other down non-stop.

Lemieux told reporters that he didn’t expect to have a difficult time against the Brit, but that he’d be Saunders’ worst nightmare, promising the Englishman ‘hell’.

Saunders retaliated by calling the French Canadian a ‘walking punchbag’ who made his reputation fighting old men and bums; he just didn’t believe they’re in the same class.

When Lemieux ramped up the animosity on Twitter with posts calling Saunders a peasant and threatening to put him in a coffin, Saunders decided to take the high ground. He told reporters that he only respects the boxing world, and called Lemieux’s rants about death and coffins ‘stupid talk’ that was ‘upsetting and discrediting’.

He then offered to give the Canadian a kiss on the cheek when he won, to which his opponent responded that he’s get a hook to the head if he did. Which inadvertantly conceded the point that Saunders would win quite neatly, but we’re not getting in the middle of this…