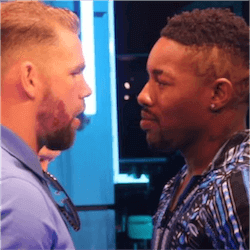 It says something for the boxing fraternty that Billy Joe Saunders defending his WBO middleweight title against the USA’s Willie Monroe Jr in London was only the second-biggest fight that will be keeping Australian punters entertained. But after two years of frustrating cancelled bouts and only one title defence for the British world champion, it’s a fight that was always sure to attract lots of attention.

Betting sites online were heavily favouring Saunders, undefeated in 24 fights with 12 KOs, to retain the title. The Englishman was offered at between $0.30 and $0.40 at most sites, so punters would have to place bets of Mayweather proportions if they wanted to make any decent money on him winning. An upset would have been more profitable, with Monroe Jr offered at $1.90-$2.40.

Since he beat Andy Lee in December 2015 to take the WBO world middleweight championship, Saunders has seen potential title defences frustratingly cancelled due to injury and, in the case of his July fight scheduled against Georgian Avtandil Khurtsidze, the arrest of his opponent on racketeering charges.

He’s fought only one defence of the title, against WBO European middleweight champion Artur Akavov in December 2016. He beat the Russian, but with a lacklustre performance that had some pundits calling him ring-rusty.

And Monroe Jr, on a not-too-shabby record of 23: 21-2-0 (6 KO), is looking slick and dangerous after winning the WBO Intercontinental middleweight title last year, but he is said to be very tense about taking to the ring.