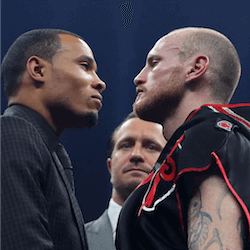 Aussie boxing fans following the inaugural season of the World Boxing Super Series have been treated to some excellent boxing since October, and the action is back in February with semi-finals in Russia, Latvia and the UK.

The Manchester Arena super middleweight semi in England’s west-coast metropolis on February 17 is going to be an all-British affair, so the only sure bet at this stage is that the UK is going to have at least one fighter in the final.

At this stage, however, what is certain is that either Chris Eubank Jr or George Groves will triumph in their February 17 semi, sending one of them through to the final. Here’s a look at how the two English fighters shape up.

Groves, 29, hails from Hammersmith in West London. After taking two consecutive senior ABA championships as an amateur, he turned pro on November 15, 2008, and has suffered three losses in 30 fights since. Of his 27 wins, 20 have been by knockout.

Groves knocked out fellow Brit Jamie Cox in the fourth round of their WBBS quarter-final to make the semis.

Son of British former two-division champion Chris Eubank, the 28-year-old was born in Hove, East Sussex. After a successful 24-2 amateur career in the US, he turned pro in 2011 and has since racked up 26 wins, 20 by knockout, with only one loss.

He’s the reigning IBO super middleweight champion, after beating Aussie Renold Quinlan in London last February; a title he has already defended three times since. He’s also a former holder of both the British and WBA interim super middleweight titles.

His path to the WBSS semis ran through Turkey’s Avni Yildirim, whom he beat in Stuttgart in October, in an emphatic Round 3 knockout.

Currently, online sports betting sites have Eubank Jr odds-on to win both his semi against Groves, and the WBSS super middleweight final.