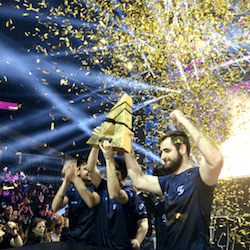 The first Blast Pro Series in Copenhagen gave eSports fans plenty of action on Saturday and Sunday. The new event, limited to six teams, is the shortest Counter-Strike: Global Offensive tournament of the year, but teams packed in some fierce action before the November 26 finals, at which SK Gaming took the crown.

The German outfit faced Danish team Astralis in the final, so they were definitely not the crowd favourites as they battled through the three maps of the concluding match. After losing map 1, Mirage, 16-11, SKG came back to take the Inferno map 16-8 and the final map, Cache, 19-16 in overtime.

The rise of eSports has been so rapid and recent that some of the top teams have barely been going for a decade. SK Gaming is different: dating back to 1997, the former Quake clan qualifies as one of the discipline’s old-timers.

Four German brothers and three of their friends formed the original ‘Schroet Kommando’ to play Quake in Oberhausen in 1997. ‘Schroet’ is German for ‘shrapnel’, which was the traditional war cry of any player handling a double-barrelled shotgun.

The team incorporated the term into their name, but the gamer obsession with abbreviations soon shortened it to SK Gaming, and these days, eSports fans know them most often as SKG. They have always been pioneers of the burgeoning new discipline; starting in 2003, they were the first eSports organisation to contract players.

The Borderless Diversity of eSports

SKG is also a great example of how eSports, and internet connectedness in general, is breaking down the idea of nation states and borders. Individual territorial sovereignty is becoming less important to many young people than the idea of everyone playing by the same rules, anywhere in the world.

For instance, SKG is officially located in Germany and Brazil, but it plays eSports as part of the North America region. A team that started off 100% German is now filled entirely by Brazilian players, but fans aren’t particularly hung up on nationalities.

When contemplating Marcelo ‘coldzera’ David, Ricardo ‘boltz’ Prass and their teammates, many eSports punters may not even know their national origins: all that matters is their ability to help their team to victory on the map.