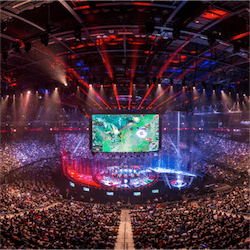 Australian sports betting fans are discovering eSports in increasing numbers, and this weekend gives them the opportunity to hone their predictive skills as the group stages main event in the League Of Legends 2017 World Championship unfolds in Beijing. At the time of writing, the opening ceremony and first day’s play was about to begin, and the tournament runs until Sunday, so punters need to get their bets in sharpish.

Those new to eSports might like to know that League of Legends, or LoL, is one of the descendants in a long line of mods spawned by the original Warcraft game. It’s a multiplayer strategy game set in a computer-generated online battle arena, with two teams attempting to capture their enemy’s base in each round. Each player in the team controls a champion, and each champions has different pros and cons, so the right blend of skills among the players is essential to any team’s success.

Likely to Dominate Groups A and B

There are four teams in each group, and Group A comprises North American underdogs Cloud9, China’s EDward Gaming, Taiwan’s AHQ Esports and South Korea’s SK Telecom T1. Many pundits expect SKT to dominate the group, based on their sterling record so far this year, but the battle for second place between the other three is going to be fierce.

In Group B, another South Korean outfit, Longzhu Gaming, is the favourite, although they could see challenges from North America’s Immortals and Vietnam’s Gigabyte Marines. Europe’s Fnatic are going to have to raise their game to compete.

Group C could be the most interesting in the tournament. Turkish outsiders 1907 Fenerbahce stunned spectators in the play-in rounds by knocking out both Brazil’s fancied Team oNe and the 2017 World Championship top seed, Hong Kong Attitude.

They now face a different level of competition, of course, but the unseeded Turks could throw up problems for three of the strongest sides still competing: Europe’s G2 Esports, China’s Royal Never Give Up, and South Korea’s Samsung Galaxy.

In Group D, North America’s Team SoloMid is looking like the best bet, although punters can expect strong challenges from Europe’s Misfits, China’s Team WE and Taiwan’s Flash Wolves.