League Of Legends World Championships Round Up 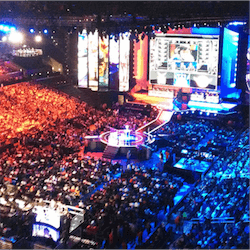 You don’t have to be a socially ill-adapted nerd or have cerebral super-powers to enjoy watching the eSports League of Legends World Championships. Millions of people from all over the globe will be watching as 16 teams from around the world battle it out in order to be crowned the players at the top of the game – and the prize money in excess of $6,7 million doesn’t hurt either.

eSports doesn’t merely compare well with traditional sports as far as revenue and viewership’s are concerned, but it has gone on to surpass conventional sporting events in more than one way.  The 2016 League of Legends World Championships was broadcast in an astounding array of 18 languages, with an estimated 143 viewers having tuned in on the e-action.

The predictions for the Group Stages are all the talk right now, and for good reason.  The outcome of these will determine who will progress to the best of five series and ultimately the Knockout Stage of the tournament.

The firm favourite to emerge successfully from Group A is without a doubt SK Telecom T1.  Even so, if the world of competitive sports has taught us anything, it’s to always expect the unexpected.

Group B will in all probability yield Longzhu Gaming as the successors upon exit, and it’s a thing of improbability to imagine an alternative reality playing itself out.  Longzhu Gaming did, after all, run all over SK Telecom T1 in order to claim the Champions trophy.  Runner-up favourites are none other than the Immortals.  Consistent game-plans and well thought out strategies are the first order of play, with rival teams the Marines and Fnatic not posing too much of a risk either way.

It obviously won’t be a thing of utter shock to see either the Marines or Fnatic make it out of the Group Stages ahead of the Immortal or even Longzhu Gaming for that matter, but it remains highly unlikely.

The Marines’ coach Duong “Tinikun” Nguyen Duy Thanh is of the strong opinion that anything goes and that there is no one right or correct way to be playing the game.  The Marines are notorious for being fearless when immersed in play on and off the stage – always following their own game plan to a T and never becoming intimidated or swayed by the opponent’s style of play.

All in all, Groups A and B are going to yield interesting results indeed.