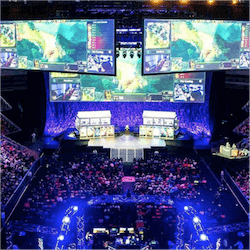 The first four days of DOTA 2 / The International 2017 in the US state of Washington were brutal on European teams. The US$23-million tournament, arguably the biggest event in the burgeoning world of e-Sports, started on Monday at 17,000-seat Key Arena in the Seattle Center.

By Thursday night, all but one European team had been knocked out, with four Chinese outfits left in the race for Saturday’s Grand Final and the US$10.67-million winner’s cheque. At the time of writing on Friday morning, Shanghai-based Invictus Gaming was facing off against Hangzhou’s LGD Gaming to decide which team would proceed to Round 5 of the Lower Bracket against the Netherlands’ Team Liquid.

That will be either China’s LGD Forever Young, an exciting team that has created thrilling upsets this year, or Chinese ‘dream team’ Newbee; the two outfits were also about to start their Upper Bracket Finals at the time of writing. Invictus and Newbee were the betting favourites in Friday’s opening best-of-three matches. Team Liquid has the lowest odds of the remaining teams to win the Grand Final, at $6.00 or less.

Defense of the Ancients and its current incarnation, DOTA 2, is one of the most successful team-player e-Sports games released by developer Valve. This combination of strategy, fighting and roleplay that uses a mix of avatar heroes in each team with different skills and specialities, is open to players all over the world, even those not equipped for more athletic competition.

As a result, DOTA 2 / The International 2017 brings together online gameplay and betting fans globally; for example, it was Malaysian player Tue ‘Ahfu’ Soon Chuan who pulled off the daring steal of an Aegis of the Immortal to help his Chinese team, LGD Forever Young, to their Round 2 victory against Russian outfit Virtus.pro.

Australian punters are joining thousands in India, the Americas, all over Europe and Russia, and of course millions in China and the surrounding nations, to bet on the young stars putting e-Sports on the map.