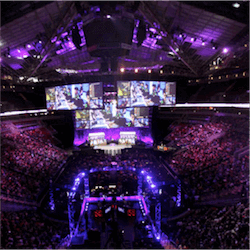 This August, the world of competitive gaming comes to a climax with the Dota 2: International egaming tournament getting underway. The Dota 2 is widely considered to be the biggest esports tournament in the world, attracting thousands of visitors and millions of online viewers. The first Dota 2 event was held in Germany back in 2011 with a prize pool of 1.6 Million US Dollars.

Since moving to Seattle in 2012, the Dota 2 International has grown to become the most lucrative egaming competition on the planet. To put it into perspective, the 2016 Dota 2 boasted a prize pool of 20 Million US Dollars and completely filled up the 17 000 capacity KeyArena where the event was held. Last year, the Chinese team, Wings Gaming emerged victorious after a best of five final against the US side Digital Chaos. For their efforts, they picked up a cool UD$9,139,002.

The 2017 Dota 2 International will be held from the 7th to the 12 of August at the Key Arena in Seattle. This year, the prize pool tops out a massive US$ 22 million. To get to the Dota 2 International, teams had to qualify through a series of single-elimination qualifiers and a group stage. The 18 teams that made it through to the event came through a Wild card series, a Group stage and main qualifiers.

With the event just days away, bookies, punters and gaming fans are focusing in which teams are most likely to shine in 2017. Since the break-up of Wings Gaming and the failure of Digital Chaos to qualify for the event, is seems the gates are open for other teams to rise to the fore. There are two names on everyone’s lips at the moment, namely Evil Geniuses and Team liquid. After finishing in 3rd place last year, Evil Geniuses have upped their game and have enjoyed wins at the Manila masters and a finals placing at the Epicentre tournament.

The team that beat the Evil Geniuses in the event was Team Liquid. While they may have finished 7th at the Dota 2 International last year, they are a force to be reckoned with and a definite frontrunner. Another team that might have a shot is Team OG. They have won four out of five Valve Majors but have since shown poor form. They were eliminated in the group stage of the Epicentre tournament but should not be ruled out.

The Betting Odds for the Dota 2 International Outright Winner