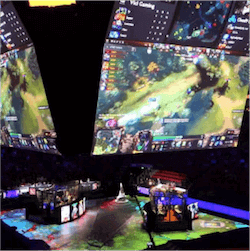 DOTA 2 – The International has come a long way since its humble beginnings in a booth on a conference floor in 2011. The world championship in the popular e-Sports game Defense of the Ancients 2, when DOTA 2 – The International debuted at Gamescom in Cologne, Germany, it was actually the first time many gamers saw the title played. Some teams had only started playing the beta-version of the game a few weeks before that tournament.

The first DOTA 2 – The International carried total prize money of US$1.6-million, with the winning team taking home $1-million. At the time, that level of prizes for what the ill informed dismissed as ‘video games’ was unprecedented, and it alerted punters to the possibilities of e-Sports. As DOTA 2’s combination of role-playing, action and strategy became familiar to global gamers, the popularity and size of the tournament has increased annually.

This year, DOTA 2 – The International began with June qualifiers in six different global regions. The championship has grown to such an extent that the event now fills an entire arena. 18 qualified teams will battle it out from 7-12 August in Seattle’s Key Arena, for total prize money of $23-million. The winners will walk away with $10-million, so Aussie punters who weren’t convinced that e-Sports are ‘real’ sports before, might be reconsidering their betting options.

The tournament is owned and run by Valve Corporation, and the seventh edition this year sees some changes to the initial stages of the competition, designed specifically to make DOTA 2 – The International more newbie-friendly. Players each pick different hero avatars when joining a team, and each hero has different attributes. To simplify things for newer players, Valve has decreed that in the first 25 games in Seattle, players can choose avatars only from a curated pool of 20 heroes, which have been identified as the ones most helpful to newbies.

Less experienced players will also be matched against players with a specific ‘behaviour profile’; in other words, those who don’t strut, gloat or abuse their opponents for every mistake. All in all, it looks like Valve is evolving the right formula to make DOTA 2 – The International more entertaining for players, spectators, and online betting enthusiasts alike.