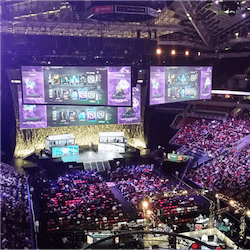 HellRaisers and Fnatic Drop Out of Dota 2 The International

The KeyArena can officially be declared ready and waiting for the top Dota teams from around the world.

The initial stage of The International 7 has formally concluded, and the playoff bracket matchups have been decided. The historic KeyArena indoor stadium in Seattle is now set to host the choicest teams in the pro scene for Dota 2, and the thousands of fans who will be attending personally will join the millions watching from their homes when the next phase beings.

A Different Format for 2017

T17 had 18 teams competing in the group years, different to the tournament’s 2016 format, and two of these got eliminated yesterday. The Southeast Asian contenders Fnatic and European little guys HellRaisers were dropped from T17 after they finished last in their individual groups.

Fnatic, particularly, were anticipated to make it through the group stages, in the lower rank at least, but, their performance in the preliminary stages made it clear that they were largely influenced by an overall want of team chemistry and coordination. The team was knocked out after they lost their opening game to Evil Geniuses.

HellRaisers, in contrast, were not seen as likely to do well, given the fact that their strength was relatively low when compared to the rest, and they did as expected.

Personnel Adjustments in the Future for HellRaisers and Fnatic

Bearing in mind that even the TI7 winners and the runners-up have altered their rosters immediately after the tournament, there is no reason to doubt that HellRaisers and Fnatic will be adjusting their teams as well. At least they will be receiving a small share of the prize money for the event for just participating!

The Top Spots of the IT

LGD Forever Young and Team Liquid wrapped up the weekend in the first spots of each of their respective groups, which awards them the chance to choose their opponents in the first round of the upper bracket. Team Liquid opted for Invictus Gaming and LGD Forever Young selected the TNC Pro Team. This means that Newbee will be facing EG, and the main LGD Gaming Squad will match up against Virtus Pro.

The T17 Main Event will start on the 7th of August at ET 13:00, with the Best-of-Three match for the upper bracket between Invictus Gaming and Team Liquid. The semi-finals and finals will follow this weekend.