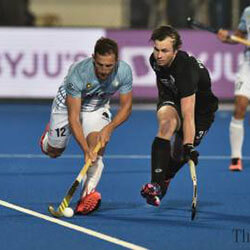 Olympic gold medallists Argentina have lived up to their title by beating New Zealand 3-0 to move closed to a direct quarter-final sport at the 2018 men’s hockey World Cup.

Argentina put on the stronger display as they created far more chances and scored three times thanks to Agustin Mazzilli, Lucas Villa, and Lucas Martinez to take three full points fr the Pool A encounter, played at Kalinga Stadium.

The Argentinian team is now at the top of Pool A with six points, and have increased their chances of getting a direct berth in the last eight round. New Zealand are now at second place with three points from their last two games, which has put them ahead of both Spain and France, both of which have one point each. Argentina had previously beaten Spain 4-3 in their tournament opener, while New Zealand edged out France 2-1.

New Zealand will now be taking on Spain as Argentina is set to face world number 20 France in their last pool match.

The Argentina vs. New Zealand match saw the first quarter go by without any goals, with the first coming in seven minutes after half time thanks to Mazzilii. Villa extended their lead by another point in the 41st minute after taking the ball from skipper Blair Tarrant. Five minutes from the end of the game, Argentina snatched their third goal as Martinez scored from a rebound, and sent New Zealand on their way.