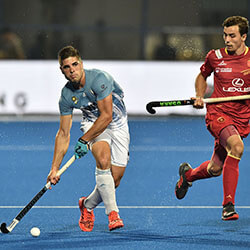 Olympic champions Argentina and New Zealand each one their first matches at the International Hockey Federation Men’s World Cup, which is currently being hosted by India. Both teams have now taken charge of Pool A.

The Olympic gold medallists from 2018 saw victory in a fast-paced match against Spain that saw them win 4-3, with New Zealand coming out as the winners of the second contest against France, 2-1.

The opening match at he Kalinga Hockey Stadium saw Argentina and Spain share five goals within the first 15 minutes. Spain’s Red Sticks managed to take the lead twice thanks to Enrique Gonzales and Josep Romeu, but both their efforts were equalised by Argentina’s Agustin Mazzil. Second world ranked Argentina took the lead when Gonzalo Peillat flocked a penalty corner right between Quico Cortes’ legs. The second quarter saw no further goals, but the third saw Spain draw the scores even with a rebound courtesy of Vincenc Ruiz.

Peillat took the lead back for his team after claiming another penalty corner. Forward Lucas Vila after the match said he was pleased with the outcome, but stated that there was room for further improvement going into the future. He added that they need to work on the defence of their circle, and that although they did try today, and they couldn’t do it in the best way, but they still managed to score more. The next round of matches sees Australia take on Ireland.