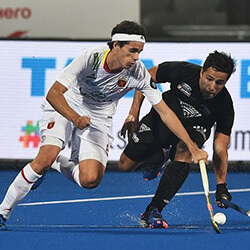 New Zealand fought back from two goals behind Spain to hold their opponents to a 2-2 draw in the penultimate Pool A match, and have qualified for a knock-out stage for the 2018 Men’s Hockey World Cup.

World number eight Spain managed to take two field goals during the opening two quarters thanks to Albert Beltran, who scored in the 9th minute, and then by Alvaro Iglesias in the 27th minute, which gave the team a comfortable 2-0 lead by the time the halfway break had started.

The Black Sticks made a memorable comeback within the last 10 minutes of the game, with Hayden Phillips claiming the first goal for the team in the 50th minute, and Kane Russell pushing the score to an even in the 56th minute. The 2-2 draw means they secured their place in the crossover round for the tournament.

Argentina, who are previous Olympic champions, are now at the top of the pool with six points from two wins. They are followed by New Zealand, who have four points, and Spain, who are sitting with 2 points in total.

Regardless of the last pool match, Argentina will remain at the top of Pool A, while New Zealand are expected to retain their second place. Per tournament format, the top four teams from the four different pools will qualify for the quarter-finals, while the second and third sides will be involved in crossover matches against teams of the same rankings in other pools.