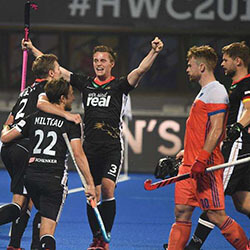 Germany has beaten European heavyweights Netherlands 4-1 in a one-sided Pool D match for the 2018 Hockey World Cup, played at Kaling Stadium in Bhubaneswar. After their win, Germany topped the Pool D charts with two wins from two games, and six points in their kitty, while the Netherlands have been moved to second place with three points.

The other match of the day saw Malaysia held in a 1-1 draw with Pakistan. Pakistan, who are currently world number 13, will now be standing at the third spot, while Malaysia is on the bottom of the roster for Pool D.

Germany has also become the first team in this year’s edition to earn direct qualification into the quarter-finals, after securing their victory against the Netherlands. Mirco Pruijiser scored the first goal for the Dutch during the 13th minute, but they failed to continue this lead as the Germans proceeded to dominate the field from the second quarter onwards.

Mathias Muller of Germany scored their first goal in the 30th minute, after which the third quarter saw no points. In the 52nd minute of the fourth quarter, Lukas Windfeder took the next point for Germany, with Marco Miltkau pushing their lead to 3-1 just two minutes later. Christopher Ruhr converted a penalty in the 58th minute, giving Germany their final score of 4-1.

They will next be facing Malaysia in their final Pool D match, while the Netherlands will be taking on Pakistan.