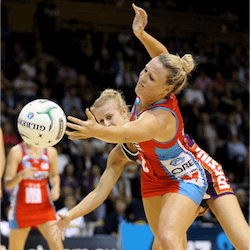 Sydney netball fans are chuffed to see the Giants heading for the inaugural Suncorp Super Netball grand final this Saturday, after they triumphed over the Melbourne Vixens in last Saturday’s preliminary final.

Finishing third on the ladder in the rounds-robin, the Giants then took a narrow 52-51 win over the Collingwood Magpies in the minor semi-final, before delivering a convincing 65-57 victory at the Hisense Arena in Melbourne, to put them through to face the Sunshine Coast Lightning in Queensland on Saturday.

To the dismay of the Vixens’ home crowd, the Giants led the match from the start. Captain Jo Harten netted 23 goals from 25 attempts, while Kristina Brice, who started the season on the Giants’ bench, had the match record with 42 from 44. Despite a late flourish of spirit that saw the Vixens win the final quarter, they had no hope of reeling in the 13-goal deficit they were facing by the end of the third.

Ironically, the Vixens had finished the rounds-robin at the top of the ladder on 23 points, after 11 wins, one draw and two losses. So punters may be disappointed in them this year, but their loss does bode well for some intense competition in 2018.

The Lightning had the same points tally and match record in the rounds-robin, but a superior goal-percentage put the Vixens on top. But then a 56-55 win by the Lightning in the major semi-final derailed the Vixens’ train to the championship, despatching them to the preliminary final, where the Giants delivered the coup de grace.

As for the upcoming clash between the Giants and the Lightning to become the first Suncorp Super Netball champions, it may be too close to call. Both sides have also excelled throughout the tournament, with the Giants finishing the rounds-robin just three points behind the top two on 20, after 10 wins and four losses.

They played the Lightning twice during the preliminary stages, and both matches went against the home side. The Giants won 55-54 in Queensland, while the Lightning took the Sydney rematch in late May 56-55. Will the home fans be disappointed again at the Brisbane Entertainment Centre this Saturday?