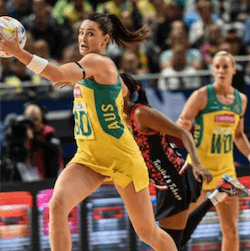 Last Sunday, the Diamonds enhanced Australia’s sporting legacy with an emphatic 67-48 victory against the Silver Ferns, to take a clean sweep in 2018’s first of two Quad Series. The tournament between four of the world’s top five netball sides: Australia, New Zealand, England and South Africa; was inaugurated in 2016, but converted to a twice-yearly format last year.

The Diamond’s victory at the Ellis Park Arena in Johannesburg on Sunday gave them their third title from four tournaments. It also allowed them to reclaim the crown from New Zealand, who won their first Quad Series in September 2017. Sunday also marked the first time the Silver Ferns didn’t finish in the top two, relegated to third by a defeat to England during the first round in London.

England also took their first runners-up spot, with South Africa losing all three of their games and suffering the humiliation of the wooden spoon for the fourth time in a row.

Aussie fans were pleased by the return to crushing form the Diamonds displayed in Johannesburg, because although the team beat both South Africa and England in the earlier rounds at London’s Copper Box Arena, it was by only four goals in each case.

The Proteas have never beaten the Diamonds, but four points is their closest losing margin ever, and the Roses, as their runners-up finish showed, are also on an upward arc. The return to imperious mastery against New Zealand was a welcome reassurance ahead of the Commonwealth Games.

Gold Coast is hosting the 21st Commonwealth Games from April 4-15, and Australian sides will be happy to have the home-ground support; the Diamonds being no exception. But with or without the crowd behind them, the defending champions, who took gold against New Zealand at the 2014 Games in Glasgow, will prove hard to beat.

Australia have won three golds and two silvers in the first five Games featuring netball. New Zealand, with two golds and three silvers, will be their biggest rivals on the Gold Coast; they’re also ranked second in the world behind the Diamonds.

England, world No. 3, is likely to be the only serious challenge to either of them.