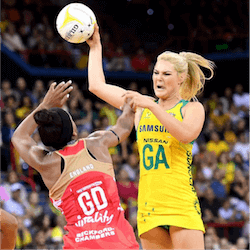 The Silver Ferns did New Zealand netball proud on Thursday night, at last getting the win in their second match of the 2018 Quad Series. They beat South Africa at Ellis Park in Johannesburg 51-46; a welcome relief after their frustrating 64-57 loss after extra time to England in their opening match at London’s Copper Box Arena last Saturday.

On Thursday in Johannesburg, the Silver Ferns led the scoring from the start, despite sustained pressure from the Proteas, who netted 82 percent of their shots at goal, and scores that remained dangerously close throughout. The win gives New Zealand a total of 108 goals-for, and 110 goals-against, in the tournament so far.

With one win and one loss, they’re tied on two points with England on the ladder, although the Silver Ferns are in third place, because England’s 110-107 for-against goal record is better.

South Africa, on 96-108 with one game left to play, looks set for the wooden spoon for the fourth tournament in a row; an unbroken streak since the Quad Series’ inauguration in 2016.

Although New Zealand are the reigning champions, it looks like Australia will maintain its dominance and snatch a third Quad Series title, after winning their first two matches and monopolising the top of the table with four points.

However, they only lead by an eight-goal difference; they beat South Africa 54-50 and England 50-46, to give them a goal difference of 104-96. Which means that in the final NZ vs Aus match scheduled at Ellis Park on January 28, a win for the Silver Ferns by 11 goals or more could see them retain the title.

That’s a hugely unlikely outcome, however, given the current form the Diamonds are in: it’s much more likely that Australia will finish the tournament 3-0 up. Even if the Silver Ferns squeeze a narrower victory to leave both sides on a 2-1 tournament total but the Diamonds ahead on goal difference, the SA vs Eng game that follows could be the decider.

If New Zealand win, they give the English a chance to clinch the title if they beat the Proteas by a big enough goal difference. If the Silver Ferns lose against Australia, they will be hoping the Proteas beat England convincingly enough to leave New Zealand runners-up, at least.