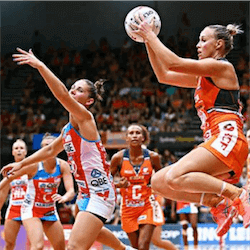 The first phase of Suncorp Super Netball was a round-robin over 14 weeks, from 18 February to 28 May, in which each team got to play both a home and away fixture against all seven of the other teams. The round-robin stage ended with the Melbourne Vixens at the top of the table, thanks to their for-and-against-goals percentage, despite being level with Sunshine Coast Lightning on 23 points.

Giants Netball were third on 20 points, with the Collingwood Magpies fourth on 18 points. That’s when the competition structure got a little complicated: as Numbers 1 and 2 on the ladder, the Vixens and the Lightning went on to contest the Major Semi-Final, while the Giants and the Magpies played the Minor Semi-Final

The Major Semi-Final took place on 3 June at Melbourne’s Margaret Court Arena, and the Sunshine Coast team made up for that round-robin goal deficit with a nail-biting 56-55 victory that looked like it could go the other way right until the final quarter. Despite their loss, however, the Vixens are still in which a shot at the championship.

The Minor Semi-Final was also held on 3 June, at the Sydney Olympic Park Sports Centre. It was another incredibly close match, but the Magpies eventually succumbed to their hosts 52-51, which eliminated the Melbourne side and left them fourth overall. The Giants will now play the Vixens in the Preliminary Final this Saturday, in Melbourne’s Hisense Arena.

Netball fans will be sure to have a punt on the result, as the winner of this game will meet the Lightning in the Grand Final on 17 June. In the rounds-robin, all three teams have one win and one loss against each of the other two, so the final two matches of 2017 Suncorp Super Netball are sure to produce exciting betting action.