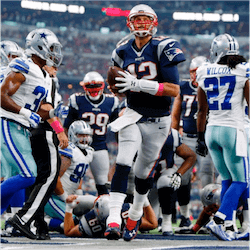 New England Patriots had no trouble beating the Denver Broncos by 41-16 on Sunday, to go 7-2 atop AFC East, second to the Pittsburgh Steelers on the AFC ladder only because of their win percentage in conference games.

However, a narrowly missed touchdown in the second quarter had Patriots coach Bill Belichick calling again for the NFL to consider installing goal-line cameras and adjusting the rules to allow disputed calls to be referred.

Quarterback Tom Brady lofted a 19-yard pass to tight end Rob Gronkowski on the goal-line, but on-field officials ruled the pass incomplete. The ruling stood, despite a challenge from Belichick, and Grotowski insisted after the game that he made the catch.

The disallowed TD didn’t alter the result or the Patriots’ standings any, and Belichick was careful in post-game interviews to point out that the ruling could have gone either way, or that camera evidence might well have proven the ruling right.

His point is rather that if the technology exists, why not use it to avoid any such uncertainty over close calls, especially if they could affect a result or Super Bowl playoffs prospects?

He cited the use of goal-line cameras in reviews in a Week 7 match between Kansas City Chiefs and Oakland Raiders, and suggested that the NFL considers introducing them in all games.

Cameras have been accepted as appropriate backup for human judgment in horseracing for decades, and referral technology in other major global sports goes back to Hawkeye in tennis and cricket in the early 2000s.

These technologies make close line calls, and even cricket’s notorious LBW decision, much more accurate. Camera referrals have also been accepted as invaluable assists to the on-field officials by Fifa in soccer, in World Rugby Union, and in sports like badminton and both Gaelic and Aussie Rules football.

Given that Aussie Rules and Gaelic are two of the fastest styles of football in the world, there can hardly be concern that camera referrals will slow down NFL football, a game with more than enough clock stoppages already to accommodate replays for off-field adjudicators. Belichick might have a point that the NFL will want to consider, if their concern is getting close calls right all the time.