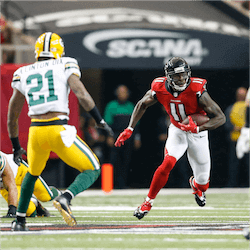 Australian NFL fans got a slight feeling on de ja vu watching Sunday’s game between the Atlanta Falcons and the Green Bay Packers; it was eerily similar to the NFC Championship game the two teams played in January. The Falcons built up a commanding lead in the first two quarters of that one, too, before fending off the resurgent Packers in the last two quarters.

As any fan remembers, the Atlanta side weren’t that impressive in the Super Bowl that followed. After being 28-3 up in the third quarter, the Falcons allowed the New England Patriots to claw back 25 points unanswered, to send the game into overtime for the first time in Super Bowl history. Six more unanswered points in overtime sealed it for the Patriots, leaving Atlanta supporters gutted.

Luckily for the Falcons, the Packers didn’t have the wherewithal to make a comeback of those proportions yesterday, despite a flash of fighting spirit in the final quarter. The game was the first regular-season NFL fixture in Atlanta’s new Mercedes-Benz Stadium, which got to show off its unique retractable roof.

As they did in the NFC Championship, Atlanta started with a strong first two quarters, with some excellent passing from Matt Ryan and Julio Jones, a field goal from Ryan as well, two touchdowns from Devonta Freeman, and one from Tevin Coleman. The Packers’ early resistance, in the form of a TD from Ty Montgomery, crumbled, and after two quarters the score was 24-7 to the Falcons.

In the third quarter, another TD from Desmond Trufant sealed the deal, and despite a strong fight-back from the Packers, with a series of TDs in the final quarter that would have had Falcons’ fans’ mouths in their throat, the home side finished with a comfortable 34-23 victory.

Atlanta now have two wins from their first two games, after beating the Chicago Bears 23-17 at Soldier Field last week. The Packers are on one win and one loss; they also had a successful opener against the Seattle Seahawks at Lambeau Field last Sunday, winning 24-9.