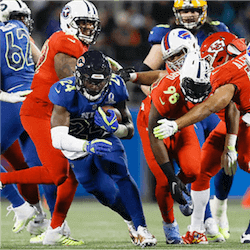 This weekend will see the final pre-season games among pro football teams in the USA. Next Friday night, 8 September, the 2017-18 NFL season kicks off in earnest, with teams playing in two conferences, each split into North, South, East and West divisions.

Friday night’s opener features defending 2017 Super Bowl champions the New England Patriots, in the AFC East Division, against the AFC West Division’s Kansas City Chiefs. Apart from being the early outright favourites, at $3.50-$4.00, to retain the Super Bowl next February, the Patriots are also heavily fancied, at less than $0.30, to beat the $3.20 Chiefs in Boston. Aussie punters who want to place their bets can do so online at Crownbet, where they’ll find great odds for all the games.

Of course, Sunday is the big day for American football, and the line-up on 10 September won’t disappoint. There are no less than 12 games to bet on. NFC South Division’s Atlanta Falcons, the 2017 Super Bowl runners-up, are contenders to at least retain their NFC Conference Championship crown, but they will be aiming to go all the way this year.

The Falcons are lying sixth in the betting rankings for outright NFL futures, but they are the favourites at $0.35 to beat the NFC North Division’s Chicago Bears, at $2.60, next Sunday.

The Pittsburgh Steelers are now fourth in overall outright betting. They face fellow-AFC North Division team the Cleveland Browns next Sunday, and the Philadelphia side is also odds-on to win, at $0.25.

Seahawks v Packers Could Be a Highlight

The most closely contested game next Sunday may be the face-off between the Green Bay Packers and the Seattle Seahawks, from the NFC North and West Divisions respectively. The Seahawks lost to Atlanta in the 2016-17 Divisional Playoffs earlier this year, and the Packers were the Falcons’ next victims, in the NFC Championship final.

However, in this season’s outright betting, both sides are ahead of Atlanta, with Green Bay second behind the Patriots at $8.00-$10.00, and Seattle right on their tail at $9.00-$11.00. So their game at the Packers’ home ground, Lambeau Field, could be a highlight of the NFL opening weekend. Green Bay are $0.65 favourites to win, with the Seahawks offered at $1.50.

The Monday-night game between NFC East Division rivals the Dallas Cowboys, currently fifth in outright betting, and the New York Giants, lying eighth, should also be a thriller. The Cowboys are $0.55 favourites, with the Giants at $1.70.