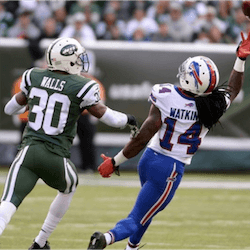 Thursday Night Football kicks off Week 9 of the 2017-18 NFL regular season with an AFC East derby. The Buffalo Bills, currently second in the division and fifth overall in the AFC on 5-2, play the bottom-of-division New York Jets, who are 12th on the AFC ladder on 3-5. The Bills are $0.65 favourites at online sports betting sites, with the Jets at $1.50.

Sunday brings another mismatch within a division, as NFC South leaders the New Orleans Saints, on 5-2, meet the 2-5 current division wooden-spooners Tampa Bay Buccaneers. The Saints, third on the NFC ladder, are $0.33 favourites, with the 14th-placed Buccaneers at $2.70.

The Carolina Panthers v Atlanta Falcons game looks more evenly matched, with the two sides lying second and third respectively in NFC South, and sixth and seventh on the conference ladder. With the Panthers on 5-3 and the Falcons, with a game in hand, on 4-3, both are very close to even money in the betting.

Betting sites reckon the Los Angeles Rams, lying second in the NFC West on 5-2, will have no trouble beating the New York Giants, whoa are bottom of NFC East with 1-6, on Sunday. The Rams are offered at less than $0.60, with the Giants at $1.60.

The Houston Texans, on 3-4 and lying third in AFC South, are likewise the $0.17 favourites against the Indianapolis Colts, stuck below the Texans on the division ladder with 2-6, and offered at around $6.00.

The Jacksonville Jaguars are odds-on against the Cincinnati Bengals, too: at $0.49 versus $1.90. The Jaguars, second in AFC South and sixth in the conference overall, are currently on a 4-3 record, while the Bengals lie third in AFC North on 3-4.

Sunday’s other three matches with strong distinctions in the betting, and thus the potential for a big upset, are the Arizona Cardinals v the San Francisco 49ers, the Washington Redskins v NFC West and conference leaders the Seattle Seahawks, and the Oakland Raiders v the Miami Dolphins.