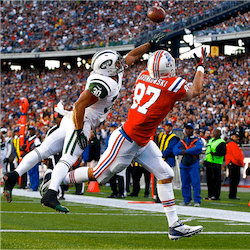 The Philadelphia Eagles confirmed that they’re going to be the team to watch in the 2017-18 NFL season with another victory on Monday night, finishing Week 7 with a 34-24 victory over the Washington Redskins. The win puts the Eagles on a record of 6-1; the only team to have lost just once so far this season.

That loss was in their second game last month, when they went down 27-20 to AFC contenders the Kansas City Chiefs. But the Eagles already beat the Redskins 30-17 in their season opener, and have also scored convincing wins against the New York Giants, the Los Angeles Chargers, the Arizona Cardinals, the Carolina Panthers, and now the Redskins again.

The Philly team is topping the NFC East division with little competition: their nearest division rivals are the Dallas Cowboys on 3-3. The Eagles also top the NFC ladder, with NFC North and West leaders the Minnesota Vikings and Los Angeles Rams both on 5-2, and the New Orleans Saints leading NFC South on 4-2, with a game in hand.

Redskins Still Have Time to Catch Up

The Redskins, now on 3-3 like the Cowboys, also have a game still in hand, thanks to the bye weeks. Their season looks a little dismal at present: they’re 11th overall on the NFC ladder and third in NFC East, based on division games win percentages, behind the Cowboys and the Eagles.

And they’re in a lot better shape than the New York Giants at the bottom of the division on 1-6, so a few well-timed wins for the Washington side could improve their prospects of making the playoffs considerably. Sunday’s clash between the Redskins and the Cowboys in Maryland is going to be an important one, because the winning team will be better placed in the playoffs hunt.

The Eagles have home-ground advantage when they play the San Francisco 49ers on Sunday. The California team is at the bottom of the NFC ladder after an appalling 0-7 start to the season, so punters shouldn’t expect great odds on the Eagles. Aussie sports betting enthusiasts will probably get better action from the Redskins-Cowboys game, with the teams more evenly matched.