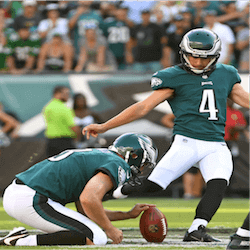 A few weeks ago, Philadelphia NFL fans were starting to dream that the Eagles might have a shot at reaching the playoffs. With week 11 of 17 wrapping up, they’re starting to demand it.

The Eagles went 9-1 on Sunday night, winning their eighth straight game and securing the longest winning streak they’ve conjured up since 2004-5.

They were in Arlington, Texas, to play the Cowboys, and despite losing their kicker in the second quarter and Carson Wentz off his game for the first time all season in the first half, the visitors came back from a shaky start to beat the Dallas side 37-9.

The Cowboys are now on 5-5, lying second behind the Eagles in the NFC East. The Eagles top the NFC overall, and there isn’t a team in the AFC matching them at the moment.

Fans are still waiting for Eagles’ kicker Jake Elliott to be given the all-clear after he had to leave the field in the second quarter with a head injury. He took a bad knock while launching a saving tackle on the 61-yard return that Ryan Switzer rocketed back from the opening kickoff.

Shortly after missing a 34-yard field goal later, Elliott was examined on the trainer’s table, and then taken off to the locker room. It was announced at halftime that he wouldn’t be returning for the rest of the game.

Punters backing the Eagles to go all the way to the 2018 Super Bowl will be hoping Elliott remains concussion-free. Linebacker Kamu Grugier-Hill, who has some soccer experience, took over the field goal kicking, but without much success.

Caleb Sturgis might be fit enough to return from injury in upcoming games. If not, the Eagles may need to sign another kicker in a hurry.

Wentz and Offense Turn It Around

Happily for Philly fans, quarterback Wentz finally hit his stride in the second half, consigning his 7 of 18 for 81 yards in the first half to painful memory. He finished the game 14 of 27 for 168 yards with two touchdowns.

Former Miami Dolphins running back Jay Ajayi was at the forefront of an unstoppable rushing attack, contributing a 71-yard touchdown run of his own. The defense gave Cowboys QB Dak Prescott a nightmare night with three interceptions, almost equalling the 4 he had let through in the entire season previously.

The Eagles face the Bears in Week 12, followed by the Seahawks.