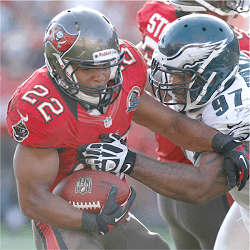 The Philadelphia Eagles’ 27-13 victory over the Dallas Cowboys on Sunday put paid to the slim hopes Tampa Bay Buccaneers fans still had that their team would make the NFL playoffs. The Buccaneers would have needed a whole series of Hail Mary results from other teams in the NFC, including a tie between the NY Giants and Washington Redskins, so it was always going to be a long shot.

Nevertheless, they ended the regular season in fine style, beating the Carolina Panthers 17-16 to finish second in the NFC South; the first time they haven’t finished last since 2011. Despite missing six weeks of the season with a hamstring injury, Buccaneers running back Doug Martin still made 421 yards over the season, so punters were looking forward to what he could deliver in the Panthers game.

Sadly, it was not to be. Earlier in the week, the NFL had suspended Martin for four games after he tested positive for a performance enhancing substance. The suspension took effect immediately, barring him from the final game of the regular season. While football fans were watching the Buccaneers eke out the narrowest of wins over the Panthers, the 27-year-old from Oakland, California, was already seeking treatment in a rehab facility.

Seeking Treatment for Adderall Use

The substance for which Martin tested positive is apparently Adderall, a combination of two forms of amphetamine that functions as a central nervous system stimulant. It has not been revealed whether the running back was using the drug recreationally or as an athletic performance enhancer, but he told reporters that his initial reaction was to appeal the test finding.

Upon reflection, however, he decided instead to come clean and seek help in a treatment facility. Teammates and management alike have expressed their support for his decision, with Buccaneers coach Dirk Koetter saying it was important for Martin to focus on his long-term health. However, it is not yet known whether the Buccaneers management will exercise its right to void the $7-million guarantee on his 2017 contract.

Having missed the Panthers game, on his return from rehab Martin will also have to sit out the Buccaneers’ first three clashes of the 2017 season in September.