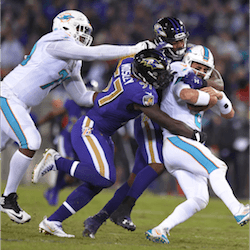 Gridiron fans got their money’s worth from Thursday Night Football in Baltimore in NFL Week 8, when the Baltimore Ravens annihilated the Miami Dolphins with the largest shutout margin in the Ravens’ history. The 40-0 victory leaves the Ravens on 4-4 for the season, and keeps them in contention for a playoffs wild card.

Running back Alex Collins helped deliver the record-breaking win with the best stats of his career, making 113 yards in 18 carries against a formidable Dolphins defense. Baltimore were up 7-0 by the end of the first quarter, and 20-0 by halftime. A scoreless third quarter was followed by another burst of brilliance by the Ravens in the final 16 minutes of the game, in which they doubled the score for an emphatic victory.

The Dolphins went into the away game on a three-game winning streak, but their inability to penetrate the Ravens’ defense was made worse by poor discipline. Linebacker Kiko Alonso was penalised for a personal foul on Joe Flacco in the second quarter that put the Ravens’ quarterback out with a concussion.

This precipitated a verbal assault on Alonso from John Harbaugh, in which the Ravens coach had to be held back by officials. In the final seven minutes of the game, frustration got the better of the Dolphins again, and defensive end William Hayes was penalised for unnecessary roughness. The penalties did nothing to help Matt Moore in his first start as Dolphins QB, and he battled to create any impact for most of the night.

The NFL division ladders will look a bit different once the rest of Week 8’s matches have been played, and the Dolphins are the team facing the greatest insecurity. Now lying third in AFC East, they could drop to the bottom, depending on the result in the New York Jets’ game against the Atlanta Falcons.

Miami’s position in the AFC wild-card hunt is under threat from the Jacksonville Jaguars, Denver Broncos and Houston Texans, not to mention the Ravens. The Baltimore side, in contrast, is secure in second on the AFC North ladder, behind the Pittsburgh Steelers, who go into Week 8 on an unassailable 5-2.

The Cincinnati Bengals and Cleveland Browns ended Week 7 on 2-4 and 0-7 respectively. So no matter what the results of the Bengals-Colts and Browns-Vikings matches in Week 8, they are no threat to the Ravens’ standings as yet.