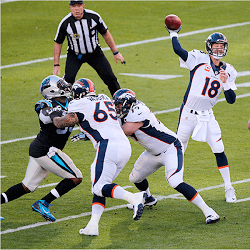 When it comes to international sport, American Football is certainly one of the most popular betting sports in Australia, and all over the world. One of the biggest games in NFL is the Super Bowl. This is the championship game that caps off the previous season and is one of the most televised single sporting events in the world. In 2017, the 51st Super Bowl final will be held on the 5th of February in Houston Texas. The game will showcase the teams that have risen above all the other to make it to the finals. While punters look forward to the 2017 championship game, we take a look back at what happened in 2016.

The 2016 Super Bowl was the 50th edition of the prestigious competition and was emphasised as the Golden Anniversary with a number of gold-themed initiatives brought in throughout 2015. The game was played on the 7th of February 2016 at the Levi’s Stadium in California. The two teams that had the honour of playing in the Super Bowl 50 included the AFC champion the Denver Broncos and the NFC champion the Carolina Panthers. While it was played in 2016, the championship game forms part of the 2015 season as the championship final.

Getting to the Finals

In 2015, the Carolina Panthers finished their regular season with a sterling 15-1 record. The team picked up the league’s top honours for offence. Panthers quarterback, Cam Newton was also named as the NFL’s Most Valuable Player of the season. The Panthers defeated the Cardinals in the NFC Championship game to advance to the Super Bowl for the second time since the team was founded.

The Broncos finished their season with a slightly less impressive 12-4 record. They claimed the league’s top defence despite having troubles with their quarterback. The Broncos defeated the defending Super Bowl Champs, the New Elands Patriots in their AFC Championship game to book their place in the Super Bowl for the eighth time.

The 2016 Super Bowl was considered to be one of the most defensive matchup’s in the history of the NFL. The Broncos took the lead early in the game and never looked back. The team recorded a total of seven sacks and forced no less than three turnovers. The Carolina Panthers kept within touching distance racking up five sacks with an impressive two turnovers. The Broncos went on to win the match defeating the Panthers 24 points to 10.

With the 2017 Super Bowl on the horizon, punters can be assured that the final and the matches leading up to it are going to provide plenty of fast paced action and entertainment.