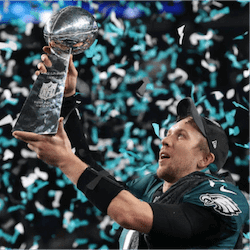 NFL fans the world over got to see an historic first on Sunday, when the Philadelphia Eagles took their first Super Bowl in 52 years, on their third attempt. A last-three-minutes touchdown from Zach Ertz and a final 48-yard field goal with 1:05 left on the clock from Jake Elliott put an eight-point nail in the New England Patriots’ coffin, giving the Eagles a 41-33 victory.

The loss put paid to the defending champions’ hopes of repeating their 2004 and 2005 Super Bowl double. They’d been favourites in the betting, and lived up to that billing for much of the game; but the crowd at Minneapolis’ US Bank Stadium got an exhilarating surprise at the finish.

Just when it looked as if the Patriots had done enough to retain the Super Bowl for the second time in their history, Ertz and Elliott scored, and Philly football fans went wild.

A nasty helmet-to-helmet clash with Eagles safety Malcolm Jenkins put Patriots wide receiver Brandin Cooks out of the game in the second quarter. Cooks didn’t see Jenkins bearing down on him when he caught a pass over the middle and turned to run it back, and the two met head-on.

Medical personnel walked him off to the locker room, and he missed the rest of the game. There’s no word whether he has a concussion, but the incident highlighted the risks football stars take with their health, and the need to keep players better protected – both during their careers and afterwards.

Retired New Orleans journalist Ted Jackson’s story and photographs of Jackie Wallace were widely shared on social media over the Super Bowl weekend, bringing home the fans and punters the toll the sport takes on athletes.

Wallace, a three-team legend in the 1970s who played in two Super Bowls, spiralled into alcoholism, crack addiction and homelessness when he left football. He goes through cycles of recovery and relapse – as of late 2017, he had once more disappeared onto the streets and was most likely using again.

Although substance abuse and poor financial planning with his football earnings are part of Wallace’s problem, an often ignored factor is the pain he is in, and the surgeries he has needed, to repair his body from the damage it took in the NFL. It’s an area where many feel players need more support.