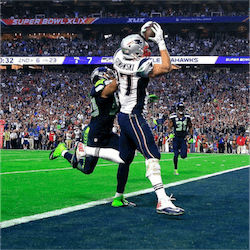 After months of build-up, Australian fans of American football finally got to place their bets on the 2017 Super Bowl, played in Houston’s NRG Stadium on Sunday night. The New England Patriots had been favourites to win Super Bowl LI for most of the season, but when they were trailing 28-3 in the third quarter, it looked like the Atlanta Hawks were pulling off an impressive underdog win.

And then, the Patriots came back… With quarterback Tom Brady smashing a few individual records along the way, the Patriots made history with a 34-28 win in overtime; previously, the largest deficit ever overcome by a Super Bowl winner had been 10 points. Brady’s performance earned him a fifth Super Bowl ring, making him the only quarterback and one of only two players in history to achieve the feat.

It was also Brady’s record seventh appearance in a Super Bowl, and won him his fourth Super Bowl MVP title; another record. He broke his own Super Bowl record with 43 pass completions, and threw a total of 466 passing yards; also a Super Bowl first. Running back James White also set two records for the Super Bowl, catching 14 receptions and scoring 20 points.

With its massive global TV audience, the Super Bowl is about more than just the game. A spectacular halftime show and high-impact Super Bowl-themed commercials are now traditional features of the night as well. As expected, some of the ads took a poke at the USA’s new president, but former Queen of Shock Lady Gaga surprised many with her halftime show.

If she had any political message, it was coded into the songs she chose: her performance focused instead on delivering the hits with enormous energy, along with a spectacular stage show for the worldwide audience. She also appeared in the Tiffany jewellery commercial aired just before the halftime show, so it looks like meat dresses are out and mainstream acceptability is in for the star.