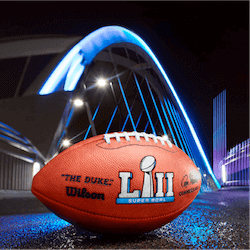 The 52nd Super Bowl on Sunday, February 4, or Super Bowl LII as the NFL insists on styling it, as if American football fans had been crying out for more Latin homework, is at the centre of a number of quirky coincidences.

The clash features the two respective conference champions in the most important game on the football calendar, the NFC’s Philadelphia Eagles against the AFC’s New England Patriots, and the usual televised hoopla will include Pink singing the US national anthem and Justin Timberlake in the halftime show.

First, it’s a rematch of the 39th Super Bowl in 2004, which also featured the Patriots against the Eagles. That was also the last time the Eagles finished as NFC champions to make the Super Bowl; the Patriots in contrast have made five of their 10 Super Bowl appearances since that game, securing two wins in that time.

Super Bowl LII is only the Eagles’ third Super Bowl appearance in the team’s history; they lost by an agonising 24-21 in the final quarter against the Patriots in 2004. In 1980, the Raiders, newly relocated from Oakland to LA, beat them a resounding 27-10 in the Philadelphia side’s first Super Bowl.

The next coincidence is that in 2004, the Patriots were the defending champions, having beaten the Carolina Panthers 32-29 the year before in the 38th Super Bowl. Last year, of course, the New England team defeated the Atlanta Falcons 34-28 in overtime to take their fifth Super Bowl win from 10 appearances, so they’re the defending champions again.

Their 2017 win left them behind only the Dallas Cowboys, on five wins from eight Super Bowls, and the Pittsburgh Steelers, on six from eight, in the record books. It also means that the Patriots have a shot at taking another back-to-back brace of Super Bowls; a feat that hasn’t been managed since the Patriots last did it themselves in 2004.

The last team to make two Super Bowls in a row was the Seattle Seahawks in 2013 and 2014, but although the side from Washington State won their first Super Bowl in 2013, it was the Patriots who unseated them the following year.