Which NFL Winning Streaks Will Survive? 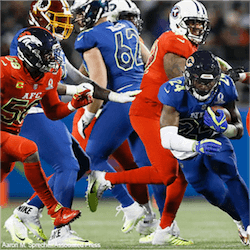 Week 3 of the 2017 NFL season starts with Friday night’s game: an NFC West intercity challenge between the Los Angeles Rams and the San Francisco 49ers. In outright betting, the Rams, with one win and one loss from their first two games, are favoured over the 49ers, whose win-loss record sits at 0 and 2. The LA team at $0.70 for a win and the 49ers at around $1.40.

Sunday brings the usual tsunami of American football, with 13 games scheduled. The earliest of these takes place at Wembley Stadium, London, in the early afternoon. In a drive to popularise the sport in the UK, this year there are four games scheduled in London, starting with Sunday’s AFC North vs AFC South clash: Baltimore Ravens against Jacksonville Jaguars.

The Jaguars have a win and loss, but the Ravens started with two wins: against the Cincinnati Bengals and the Cleveland Browns. Betting sites have the Baltimore team at around $0.55 to go to 3 and 0, versus the Jaguars at $1.70. There are four other teams in the AFC, and three in the NFC, that are on 2 and 0 after two weeks.

AFC North’s Pittsburgh Steelers, who beat the Browns in Week 1 and the Minnesota Vikings last Sunday, play the 0 and 2 Chicago Bears this week, and betting sites are offering a paltry $0.30 on the Pennsylvania side staying atop the AFC ladder.

AFC West’s Denver Broncos, Kansas City Chiefs and Oakland Raiders are also on 2 and 0. Betting sites are offering the Broncos at $0.65 against AFC East’s Buffalo Bills, who currently have a win and a loss, on Sunday. The Chiefs play AFC West’s winless-so-far Los Angeles Chargers, and the Missouri team are also odds-on to win, at around $0.60. On Monday, the Raiders are fancied at $0.65 against the 1 and 1 Washington Redskins.

In NFC South, the Atlanta Falcons and Carolina Panthers are still undefeated, as are NFC North’s Detroit Lions. Barring a tie when the Falcons play the Lions on Sunday, one of them will see their streak broken: the Falcons are offered at $0.66, with the Lions at $1.40. The Panthers meet NFC South’s New Orleans Saints on Sunday, but they’re another team on 0 and 2. The Panthers are favourites at $0.42.