Vikings Back in Hunt after Beating Bears 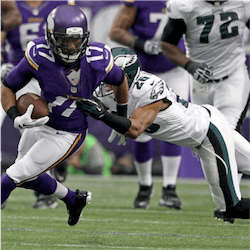 Minnesota Vikings fans were hoping for great things from quarterback Sam Bradford this week, when he started in his first NFL game in a month against the Chicago Bears on Monday Night Football. What they got instead was an unimpressive four sackings and 5-11 for 36 yards, and a first-half performance only. At half-time the Vikings were 3-2 ahead, but Bradford was out, with a possible return of his knee injury.

In the second half, back-up QB Case Keenum put some fire into the Vikings, while his rookie opposite number, Mitch Trubisky, struggled to stay consistent for the Bears. The Vikings came away with a 20-17 win, leaving them 3-2 overall this season. The two sides’ positions in the NFC North division remain unchanged: the Vikings are third and the Bears, on 1-4, fourth.

However, the win was enough to propel the Vikings into seventh place on the NFC ladder, so they’re contenders to take a wild card berth in the playoffs, if they can unseat the Atlanta Falcons or the Detroit Lions. The Minnesota team will be looking to strengthen that challenge with a win against the 4-1 NFC North leaders, the Green Bay Packers, this Sunday. If they pull it off, they’ll reward risk-taking online punters: the Vikings are being offered at $2.40, with the Packers fancied at $1.62.

Panthers Roll Over for Eagles

Week 6 of the season kicked off with Thursday Night Football in Charlotte, North Carolina, as the Panthers hosted the Philadelphia Eagles. Both teams were on 4-1 atop their respective divisions, NFC South and NFC East, and although they ended the first quarter tied, from then on it was all Eagles.

Philadelphia QB Carson Wentz put in a stellar performance; despite the vaunted Panthers’ defense, he threw a total of 222 yards and three touchdowns. The subsequent 28-23 win keeps the Eagles at the top of the NFC ladder on 5-1.

The Panthers, now on 4-2, could lose the top spot in NFC South to the 3-1 Atlanta Falcons, if the Falcons keep winning. The Panthers will play the Bears next Sunday, while the Eagles host the Washington Redskins the following Monday.