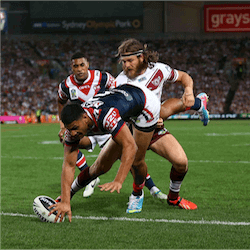 All 16 teams in the NRL have now played 17 matches in the 2017 season, with all bye rounds complete. They now have seven matches left, before the Top 8 go through to the quarter-finals, in a year in which sides look like they’re going to need at least 30 points on the ladder to make it.

Melbourne Storm and Sydney Roosters, currently on 30 and 28 points respectively, look assured of berths in the finals rounds. The Sea Eagles, the Broncos, the Sharks and the Cowboys are also looking good for the Top 8, on 26 points each: especially as they will have representative players available again after State of Origin.

The two sides with everything to defend in their final seven matches are Parramatta Eels and St George Illawarra Dragons, sitting seventh and eighth on the ladder on 24 and 22 points, respectively. Both have one or two tough matches among the seven, against the likes of the Sea Eagles and the Broncos, although the Eels may have the more daunting task, because they face the Broncos twice.

Panthers Top of the Contenders

However, the Dragons are going to need the wins more. Snapping at their heels in ninth on the ladder, with 20 points, are Penrith Panthers. The West Sydneysiders need five wins from their last seven matches, but five of those will be played at home in Pepper Stadium: including the next four against Gold Coast Titans, Canterbury-Bankstown Bulldogs, Wests Tigers, and North Queensland Cowboys.

Of those sides, only the Cowboys are above the Panthers on the ladder, although their two away matches, against Canberra Raiders and Manly-Warringah Sea Eagles, should prove tougher. The big clash to watch, however, will be their home game against the Dragons in Round 25, which should reveal which team is hungrier to make the Top 8.

The Raiders, currently 10th on 18 points, might also succeed in a last-minute surge for the QFs. They take on the Storm at home in the GIO Stadium this Saturday, and if they can surprise the ladder leaders, they could prove a serious threat to the Dragons or the Eels for the Top 8.

The Titans, one of four teams on 18 points, are also making a late challenge. They spanked Cronulla-Sutherland Sharks 30-10 last week, and if they beat the Panthers this weekend, the QFs are still within touching distance.