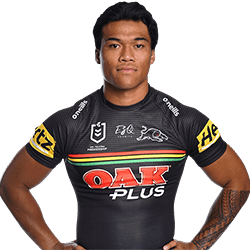 Brian To’o has been a machine while playing for the NSW Blues and Penrith Panthers the last few weeks. Along with teammate Jarome Luai, he has had the world of ruby discussing his future. Many believe that this dynamic duo could easily be chosen for the Australian team. They both, however, would prefer to play for Samoa if given the choice. Josh Papali’I has also previously announced his desire to represent Samoa.

The dominant duo has been making headlines for the role that they have played in securing back-to-back victories over the Maroons in Queensland. As they do not officially represent a club, many people have started questioning their futures, with many thinking that they could potentially play for Australia.

Given their Samoan heritage, it should come as no surprise that they would much rather play for their home country.

Australian coach Mal Meninga has suggested a possible Australian call-up for Luai and has asked him to rethink his allegiance to his country. The same approach will need to be followed if Meninga has any hopes of getting To’o to join the team.

In 2019 To’o had played for Samoa during a game against Fiji which the team lost, however, he would like to play for the team again. Former players Matthew and Andrew Johns have also indicated that they would be interested in leading the team to victory at the next World Cup. The Samoan Rugby League declined the offer and is backing current coach Matt Parish.