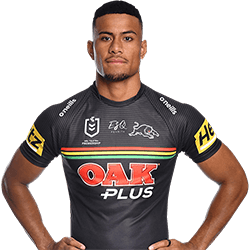 Upcoming Origin playmaker Stephen Crichton has signed a two-year extension deal with the Penrith Panthers. This means the promising young 20-year-old is set to remain with the Panthers until the end of the 2023 season.

The deal marks a significant thumbs-up from Ivan Cleary’s side, and not completely unexpected either. Crichton lived a breakout 2020 season during which he scored 17 tries across 22 games.

The young centre said he’s excited about spending at least another 3 years with the Panthers, a team he said he now considers his home. Having grown up as a junior player with the club, he said there was nowhere else he’d rather be.

Rumour has it that the Bulldogs had reached out to Crichton’s manager in an attempt to lure him to Belmore. But the local junior clearly has no desire but to continue to play for the club he considers his family. He’ll be playing at least two more years in Penrith colours, and according to Panthers General Manager of Ruby League, Matt Cameron, the club is equally thrilled about having the young gun until at least the close of the 2023 season.

Cameron said Crichton was yet another example of a junior player sourced locally and developed into a full-on NRL player by the Penrith Panthers. He said the club takes immense pride in the youngster’s journey through the ranks of the sport and hopes that his successes will inspire a next generation of players to do the same across the Panthers district.