Billy Slater Returns To The NRL for the Storm 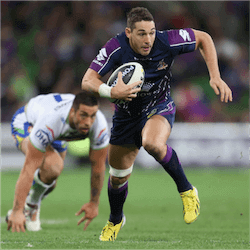 Billy Slater Returns to the NRL

After spending 374 days sitting on the side-lines, Billy Slater finally made his return to the NRL against the Brisbane Broncos on Thursday Night. High performance director of the Melbourne Storm, Lachlan Penfold worked closely with Slater over the past few months to get him ready. Penfold and his team plotted a slow and steady rehabilitation program to get Slater back into the NRL in peak condition.

Speaking to the press, Penfold said that everyone in his team had worked really hard to get Billy back to his best. He continued saying that the program would not have gone as well if Slater wasn’t as dedicated and as focused as he had been over the past year. Penfold joined the Melbourne Storm in October last year after working with the NBA Warriors during their epic 73-9 record-breaking 2015-2016 season.

At the time, Stephen Curry sprained his knee in game four of the NBA conference finals. It was looking all over for Curry until his sensational return just two weeks later. This was in the game where he went on to score 40 points off the bench. For anyone watching that day, his recovery was nothing short of a miracle. According to Penfold, there are similarities with how top level athletes teat rehabilitation. Penfold said that Stephen Curry is an extremely humble guy and one of the hardest working players on the warrior’s team.

He says the same thing about Billy Slater. According to Penfold, he too is a humble player who doesn’t just sit back wait for things to happen. These top players are constantly asking what else they can do to improve their recovery and performance. Fellow storm players are also in awe of how Slater has improved over the past few weeks. According to Kenny Bromwich, Slater looks sharp. Joe Stimson described his childhood idol as a player that is ready to go.

Despite the confidence from the team, Storm football director Frank Ponissi is urging fans to be patient with Slater. Ponissi says that it will take Billy some time to find his feet. He is not going to be the same Billy just yet. Even as good as he is, it would be impossible for a player to go straight back to where he was a year ago.