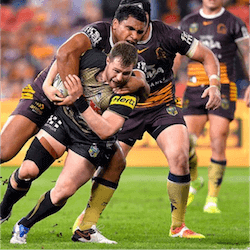 In a nail-biting NRL 2017 Qualifying Final on Saturday, ladder leaders the Melbourne Storm took the narrowest of victories over the Parramatta Eels in front of a chuffed home crowd, topping 22,000, in the AAMI Stadium. The 18-16 final score left the Eels gutted, after they’d led 10-4 at half time and seemed to be stumping the Storm, but were the victims of a dodgy try decision in the second half that probably should have been referred.

The win means the Storm will stay at home for the Preliminary Finals next week, while the Eels now have to win this Saturday’s Semi-Final against Elimination Final victors the North Queensland Cowboys, if they are to get a PF against the Sydney Roosters.

Online sports betting fans backing Melbourne will be more concerned with Friday’s Semi-Final in Queensland between the Brisbane Broncos and the Penrith Panthers, as the winners will be the Storm’s PF opponents.

The Broncos finished third on the regular season ladder, behind the Roosters in second, and the two met in a QF at the Allianz Stadium on Friday night that was also decided by just two points. And again, the visitors took a commanding lead, only to be unseated in the dying minutes of the game, which finished with the Roosters ahead 24-22.

The Panthers, seventh on the ladder, played their EF on Saturday at Allianz against the Manly-Warringah Sea Eagles, who finished sixth. Sloppy handling throughout by the Sea Eagles allowed the Panthers to get payback for the 28-12 defeat they suffered against Manly in Round 26, and Penrith won 22-10.

The Broncos are $1.40 favourites to win in front of the Suncorp Stadium crowd on Friday night, with the Panthers offered at $3.10. But with Brisbane possibly without Darius Boyd through injury and 21-year-old stars Dylan Edwards and Tyrone May underpinning a revitalised Penrith attack, it might not go the bookies’ way. In outright futures to win the Grand Final, the Broncos are at $12.00 and the Panthers at $31.00. If you want to get your bets in online, you can do so at Crownbet, as there are great odds for this and all other games.