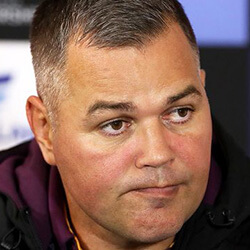 The so-called key person involved in the trolling of former Brisbane Broncos coach Anthony Seibold on social media has apparently been identified by the NRL.

The former coach was reportedly earlier this week supplied with an actual name by a private investigations and cyber-security firm instructed by Seibold for the purpose of the naming of the reputation-defaming culprit. Said individual has allegedly been identified as an employee of the New South Wales Rugby League. The person suspected of being behind the trolling of Seibold and his family during his final months spent coaching the Broncos was reportedly traced with the help of investigators having zoomed in on close contacts on social media.

A prominent Channel 9 journalist has in the meantime shared online specific details about the person suspected of standing central to the investigation. Danny Weidler has – without providing an actual name – said that he actually knew the key person and that the individual is not someone necessarily known by name to any top-ranked Blues, including Phil Gould and Paul Gallen. Instead, said the journalist, the person is very much a fringe personality at the NSWRL and apparently not formally employed by the organisation.

Worth noting is that Weidler’s assessment of the situation concluded the person identified to have been a different individual to the actual culprit responsible for spreading the rumours about Seibold.

The former Broncos coach has however since the information became public on Sunday, confirmed the culprit to be someone making an actual living from the game. The NRL has since the interview involving Seibold expressed its disappointment at having had to learn of the developments from a televised interview, and not from the former NRL coach himself.