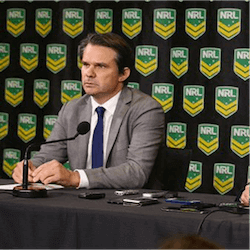 New NRL betting laws have officially been put into place, which specifically ban betting on NRL under 20s games, as well as forbidding certain novelty betting options. These changes have been met with praise by many, with some even calling them long overdue.

In a statement given by Nick Weeks, NRL Integrity unit Chief, the reasons for the new laws were made plain. Weeks said that there were a number of reasons that the laws had been put into place, but the most central being that it was believed the betting options threatened the integrity of the NRL.

Weeks concluded the statement by saying that he is aware gambling has been around forever, and will continue to be around, but that the laws put into place simply made regulating that market protecting the integrity of the NRL easier.

These statements come hot on the heels of the wave of controversy involving Tim Simona. Simona, the NRL player who has been accused of illegal betting, has yet to face the full consequences of his actions. It is, of course, illegal for NRL players to bet on matched, and Simona has been accused of making several novelty bets on NRL games. The bets in question were on which players Simona thought would be the first to score tries in an official match. Simona has been stood down from any official games. He is expected to respond to the announced intention to cancel his registration soon.

John Grant Remains at the Helm

In other related news, John Grant, Australian Rugby League Commission chairman, has managed to hang onto his job. The new funding model introduced by Grant has not impressed many official NRL clubs, and a vote was due to take place that could have seen him ousted. The vote was, however, postponed, due to now only take place in December.

Obviously pleased by the result, Grant declared that the issues are being worked through, and that the postponing of the vote went as he had expected. He added that it is never good for dirty laundry to be aired in public, and that he hoped it could be avoided in the future.