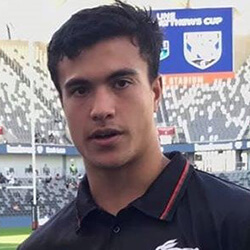 The National Rugby League has been cautioned against its motion to make an exception to its minimum-age rule in order to ensure that teenage rugby sensation Joseph Suaalii remains in rugby league.

Suaalii may be a South Sydney junior but this hasn’t stopped Rugby Australia and South Sydney from pushing for the 16-year-old’s signature. Suaalii rose to fame after he represented the Australian Schools and U/18 rugby union team in 2019.

According to a rumour spread by the mainstream media, the young player has been offered $3 million in return for signing up to play rugby union. Rugby Australia has since described the rumour as nothing short of fanciful – but also at the same time admitted to being more than just a little interested in signing the young student.

The issue with Suaalii’s signing is that at 16, he remains 2 years short of the minimum signing age for first-grade debuting players. This according to the NRL’s own age-eligibility rules. And the fact that Australian Rugby League Commission chairman Peter V’landys has made known the league’s intention of considering a lone exception in the case of Suaalii obviously doesn’t sit equally comfortably with everybody – least of all with NRL commentator Phil Gould.

Gould has expressed the belief that making an exception for Suaalii, despite his raw and certainly exceptional talent, will in all likelihood return to bite the league somewhere further down along the line.

Gould said that although he agreed with the league regarding the exceptional quality of Suaalii’s talent, other kids generally catch up fairly quickly too.