NRL Round 21 May Surprise Again 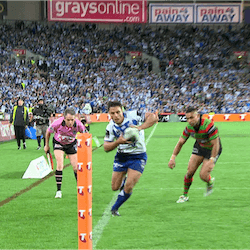 All the Round 21 NRL Action Ahead

Round 21 of the NRL season starts on Thursday night with the Penrith Panthers facing the Canterbury Bankstown Bulldogs at home in Pepper Stadium. It’s a crucial match for the Panthers, lying ninth on the ladder with 22 points, just two points behind the St George Illawarra Dragons in the Top 8. With the Bulldogs lying 13th after 11 losses from 18, it should go the Panthers’ way: they are the favourites, at $1.42.

On Friday, 12th-placed New Zealand Warriors host the Cronulla Sutherland Sharks in Auckland, with the visitors the $1.60 favourites. The Sharks are currently fourth on the ladder, between Brisbane Broncos and North Queensland Cowboys, with all three on 28 points.

In Friday’s second match, Parramatta Eels meet the Broncos in the ANZ stadium, with the third-placed Broncos offered at $1.47 and the $2.71 Eels, in seventh on 28 points, eager to fend off both the Dragons and the Panthers with an upset win.

The last of Saturday’s matches will probably have the most significant results for the Top 8. Earlier, the Knights will get to take on the Dragons, but with Newcastle languishing at the bottom of the table, the St George Illawarra side is the $1.28 punters’ fancy. If the Dragons do win, they should remain in eighth place at least, fending off the Panthers for another week.

South Sydney Rabbitohs play Canberra Raiders at the ANZ Stadium next, but with both sides in the bottom seven on the ladder, it shouldn’t shake up the teams likely to go to the finals. The match punters won’t want to miss is the Sydney Roosters’ home clash against the Cowboys.  The Roosters, second on the ladder with 30 points, are at $1.63 to beat the fifth-placed Cowboys, who are being offered at $2.29.

There are two NRL Round 21 matches scheduled on Sunday. Gold Coast Titans are fancied at $1.30 to beat Wests Tigers, but the Melbourne Storm game at AAMI Park against the Manly Warringah Sea Eagles could be a much closer contest.

The Storm are top of the ladder on 32 points, and $1.65 favourites to win on Sunday. However, on 26 points in sixth place, the Sea Eagles aren’t that far off the lead, so at $2.25, they might pull off an upset.

Get your bets in at Luxbet and back the team you want to see win!