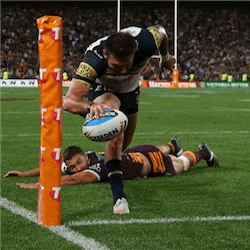 In a sharp lesson to smug pundits who wrote them off last week, including this one, Newcastle Knights pulled off only their third win of the 2017 NRL season against St George Illawarra Dragons on Saturday. The 21-14 victory won Knights fans $4.00, although they remain on track for this year’s wooden spoon.

The loss was dangerous for the Dragons: they ended the week eighth on the ladder, with Penrith Panthers snapping at their heels. From now on the Dragons need every win they can get, starting with their game against South Sydney Rabbitohs this Friday. The Dragons are the $1.50 favourites.

The Knights, meanwhile, face New Zealand Warriors on Saturday. The Warriors lost to Cronulla Sutherland Sharks last Friday, but they’re the $1.67 favourites; if the Knights can continue their late flash of fire, they may be worth a punt at $2.32.

Eels Advance on the Ladder Again

Round 21 wins by Melbourne Storm and Sydney Roosters, against Manly Warringah Sea Eagles and North Queensland Cowboys respectively, saw some reshuffling within the Top 8. The Storm and the Roosters remain in first and second, on 34 and 32 points, but on 30 points, the Sharks are now breathing down their necks in third.

Parramatta Eels shook things up even more with their win against Brisbane Broncos last Friday; the Broncos are now fourth on 28 points, separated only by points difference from the Cowboys and Eels in fifth and sixth. The Sea Eagles are in seventh with 26, just two points ahead of the Dragons and Panthers. Canberra Raiders also beat the Rabbitohs last week: on 20 points, they still have a very slim shot at the Top 8.

Given the state of the ladder, all the games coming up this weekend could be significant. The Eels are $1.42 favourites to beat Canterbury Bankstown Bulldogs this Thursday, with the Storm at $1.60 to beat the Cowboys on Friday, but both the fancied sides are playing away.

Apart from the Knights against Warriors on Saturday, the Broncos are $1.60 favourites against Gold Coast Titans. With the Sharks at $1.50 against the Raiders at $2.75 and desperate to stay in it, their match might surprise.

The Roosters are at $1.80 against the Sea Eagles on Sunday, but at $2.14, Manly might also be worth backing for an upset. At $1.30, the Panthers need the win against Wests Tigers to stay on track for a Top 8 spot.