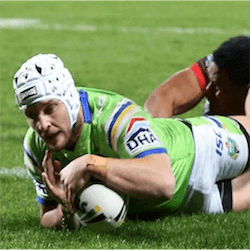 We’re in the 12th week of the 2017 NRL Premiership season, and the Canberra Raiders are clinging to the number eight spot on the ladder by their fingertips, with only five wins from 11 matches.

They have 10 points, as do the Canterbury-Bankstown Bulldogs and the Parramatta Eels. However, the Raiders have a positive points difference of +43, while the other two sides both have negative deficits, so the Raiders are the team eyeing a quarter-finals berth at this point.

The Sydney Roosters, on the other hand, are lying in fourth place, thanks to a points difference that puts them behind the Cronulla-Sutherland Sharks and the Brisbane Broncos. All three sides are tied on 16 points, behind the Melbourne Storm at the top of the ladder with 18 points.

However, with the Kangaroos and the Kiwis currently battling for Origin rugby league glory in the representative round, things get a little bit tricky. All the sides lose some players to the national team at this point, but the Roosters will be without five top stars on Sunday: Aidan Guerra, Boyd Cordner, Mitchell Pearce, Dylan Napa and Blake Ferguson.

The Raiders, on the other hand, will only be missing one of their greats at GIO Stadium: Josh Papalii. That may explain why Raiders coach Ricky Stuart has a rather cavalier attitude to other coaches complaining about losing stars during the rep round.

He reckons that rep players win grand finals, and that the benefits of having rep players in the side during the closing stages of the tournament more than outweigh the disadvantage of losing them for a few mid-season matches. Whether he’s right or not, betting fans are expecting a hard-fought game on Sunday.