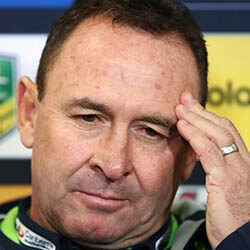 Raiders coach Ricky Stuart is about to potentially pay dearly for his outburst displayed during his squad’s recent win over the Warriors.

Stuart’s show of frustration with match-referees and NRL head of football Graham Annesley following the sin-binning of Jack Wighton during the first half of the game against the Warriors has earned him a suspended $10,000 NRL fine.

The suggestion made by Stuart that Annesley was turning fans away from the game instead of towards it did obviously not sit very well with the league, who has since issued a stern warning to Stuart and all NRL coaches to not utter the kinds of post-match comments that could later be understood as having been “open for question”.

The expectation is that all NRL coaches will be seen setting an example and standard of what behaviour within clubs is supposed to look like, said NRL chief executive Andrew Abdo. Stuart’s field-side comments, explained Abdo, is not the type of image or message the league wishes to send out into the world.

The suspended fine imposed on Stuart is according to Abdo a bond of “good behaviour”, i.e. a fine that will only come into effect and become payable in the event of a repeat offence. Said fine is intended to deter other coaches from similar comments and stunts, said the rugby boss.

Abdo also confirmed having first taken up the offence directly with the Warriors coach before announcing the suspended penalty to the rest of the coaching staff and public in general.