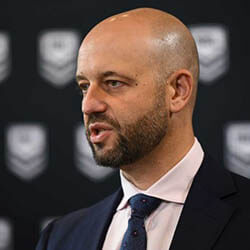 The National Rugby League’s Chief Executive Officer, Todd Greenberg, has stood down amidst the crisis caused by the novel coronavirus COVID-19 pandemic which saw the sport’s season suspended.

After sober reflection on what the game needs right now, the NRL has come to a mutual agreement with the previous CEO and parted ways with immediate effect. This is all unfolding as Australia desperately fights to extract itself from the financial catastrophe it finds itself in due to the virus’ spread.

NRL Chief Commercial Officer Andrew Abdo will step into the position for the interim while a replacement is sought for Greenberg, who has been CEO since March 2016.

Greenberg said that he views his work with the NRL as one of great honour and privilege, commenting that despite the various challenges and pressures he’s had to deal with he has loved every minute of it. He spoke of being indebted to the game for the wonderful opportunities it granted him and the rich experiences he and his family have enjoyed. He said that they’re leaving with great memories and friendships that will last a lifetime.

The most recent call he’s had to answer was the COVID-19 outbreak which saw the NRL 2020 season suspended after just two rounds. The League is hoping to return on the 28th of May but there are no details as to how that would happen available yet.

Greenberg saw his position coming under intense scrutiny recently and Channel Nine fired a blistering broadside earlier this month. In it, the League was accused of wasting millions of dollars under his leadership.

Elijah Taylor Conned Out Of $350k By Agent

The former rugby league Test star scammed out of hundreds of thousands of dollars by an ex-agent is reportedly unlikely to see even a cent of the misappropriated money returned ….

Canberra Raiders star Curtis Scott says he’s willing to settle out of court with police following his unlawful arrest on the Australia Day weekend. According to Scott’s legal team, he’s ….

Senior club officials literally hiding away from the media. The shameless throwing of coach Justin Holbrook to the wolves. The arrest of a member of the club in a drug ….