Smith Weighs In On Haynes 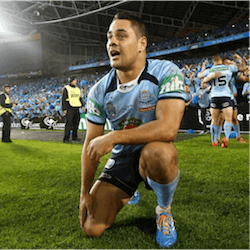 Jarryd Hayne is Both a Blessing and a Curse for NSW

In terms of the State of Origin series, Jarryd Hayne can be seen as NSW’s blessing and curse, according to Cameron Smith.

This comment was buried inside a rather lengthy speech about the pay battle developing between the player’s union and the NRL, but Smith was never going to allow his final public outing before the Series begins pass by without an albeit subtle dig at his rivals on the field.

The majority of Smith’s focus was on external elements yesterday morning, as the most senior statesman for the game weighed in on the status of the payment negotiations. His implication that Hayne could well become a liability in terms of defence for the Blues very nearly passed without notice.

The Blues are Ready for Hell

According to Hayne, the Blues are ready for the hell the Queenslanders will bring, as this team has attempted to rattle the visitors at Suncorp. But there was almost no chance the comment by Smith would elude attention south of the border, as the NSW team is in preparation to cross the Tweed and get to grips of the last days of their camp out on the Gold Coast instead of Brisbane.

As the Titans’ prized recruit, it is thought that Hayne would feel totally at ease at Robina, but Smith hinted at the opposite, intimating that it was uncertain whether or not he would feel quite as relaxed in the centre positions for the Blues at the Suncorp Stadium at Wednesday’s opening game for the Series.

Hayne’s Unfamiliar Position May be Leverage

If the team from NSW thinks that they have been able to isolate a weakness in Anthony Milford, then Queensland has certainly assumed that the selection of Haynes in a position largely unfamiliar to him as something which can be leveraged to their advantage.

In recent weeks he has played there for the Titans, and also did so in the World Cup 2013 for the Australian team, and he impressed Smith at this time. But, admittedly, this was 4 years and a stint at the NFL ago, and while there may be very few that have any doubt regarding Hayne’s ability with the ball, his ability to make defensive reads in specialist position will be very important for NSW.

Smith stated that Haynes was amazing in the World Cup of 2013, and while he didn’t think that Haynes started the position there, he brought the house down when he came in and played as excellently as he did. Smith went on to say that he was unbelievable in the 3 matches in which he may have played in that position for his team, but that times had changed. Haynes has gone overseas, played a totally different game, and returned. Smith stated that Haynes had only played 3 or 4 matches at centre leading up to the Origin series, and this factor may be an important one.