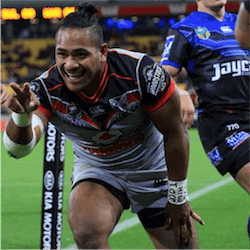 It might not have been pretty, but the Warriors have actually pulled off a win in their opening NRL season game. The win breaks the opening day curse that has plagued the team for the last eight years. The Warriors defeated the Newcastle Knights 26 points to 22 with a crucial try by Ryan Hoffman in the 73rd minute proving to be the match decider. After all is said and done, the Warriors will gladly take the win but coach Stephen Kearney will be far from happy.

At Halftime, the Warriors were in control leading 20 points to eight. In the second half, the team lost a lot of steam. They were very fortunate that Hodkinson missed two of his conversion kicks otherwise the score line would have looked a lot different. It was only in the last 10 minutes of the game that they were able to find some form and put more points on the boards. It has to be said that their performance would not have been good enough against most of the other NRL teams.

We have to bear in mind that the Newcastle Knights had previously only won a single game in the previous season and were riding a dismal 18-game losing streak. Since Coach Nathan Brown filled the side with rookies in 2016, the Knights are possibly one of the most inexperienced teams in the NRL. The game at Mt Smart was not particularly good for either teams.

Concerning Slump in Second Half

The Warriors started their NRL season with a dropped ball on their first tackle and then went on to make five more handling errors all within the space of 25 minutes. The Knights got the first points on the board before being undone by handling errors themselves. The got the chance to extend their lead but failed to capitalise on the advantage before the Warriors finally woke up.

When the Warriors finally did get going, they produced some great passes with two brilliant tries curtsey of Fusitua and his acrobatics on the field. Five seconds before halftime, Fusitua got his hat trick thanks to a brilliant one-hand flick pass from Johnson. Unfortunately, the Warriors did not continue their form in the second half. It seemed as if the team felt they had already won and stopped trying. This let the Knights back in to the game with Jack Stockwell scoring their second try after steaming through the Warriors defence.

Two further tries by Nathan Ross brought the Knights back into the lead with just 13 minutes left to play. It was looking all over for the Warriors until Hoffman forced his way over the line in the 73rd minute tipping the scores once again. The Warriors managed to hold on and for the win but will have to improve their game going forward.