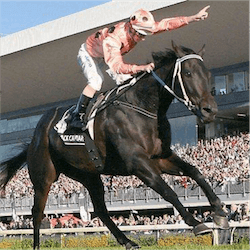 The 1200m weight-for-age BTC Cup has been a key race in Queensland since 1964, and the Group 1 status it achieved in 2006 made it the first of Brisbane Turf Club’s elite races in the annual Queensland Winter Racing Carnival.

The Cup is usually run in the second week of May at Doomben Racecourse. In the past, it has provided triumphs for great sprinters like Apache Cat, in 2008, and Black Caviar, in 2011.

While this year’s race is still set to be an exciting Group 1 sprint, the Cup has seen several changes. It’s now called the Darley Kingsford-Smith Cup, to be run over 1300m on 27 May. The venue also shifts from Doomben to Eagle Farm Racecourse up the road, but the increased purse of $700,000 will ensure that it still attracts some top sprinters.

Buck’s Pride won the BTC Cup in 1993 and 1994; the only horse in the race’s 53-year history to win it twice in consecutive years. That record will stand unchallenged this year, as 2016 winner Malaguerra is not among the 64 horse listed in early nominations for the 2017 Kingsford-Smith Cup.

Apache Cat and Black Caviar also won Randwick’s 1200m TJ Smith Stakes in the year that they won the BTC Cup, setting up another double for Australian sprinters to aspire to. Unfortunately, punters won’t be able to back any horse to repeat the feat this year either, as TJ Smith Stakes winner Chautauqua is another horse missing from the Kingsford-Smith nominations.

However, 5-year-old gelding Fell Swoop is among the Kingsford-Smith nominations, and he finished third in the 2016 TJ Smith. Ante-post betting is currently offering him at around $12.00, but those odds may shorten if he does well in the Doomben 10000 on 13 May.

Two mares that racing enthusiasts will also want to watch, in their races leading up to 27 April, are 4-year-old English and 5-year-old Sheidel.