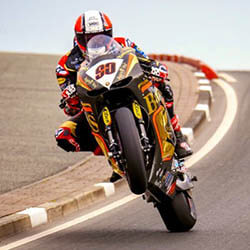 Michael Rutter has been given the ninth Macau Grand Prix victory based on a single lap after the event had received two red flags and was ultimately abandoned. Peter Hickman had been leading the race when a collision put a stop to all proceedings on lap four, while Rutter had led after the first lap of the rerun. Despite Hickman overtaking him during lap two, the red flags once again came out following a pile up that involved six riders, meaning that only a single lap had been officially completed.

Three riders were immediately taken to the hospital, but none of the injuries that had sustained were life threatening. Republic of Ireland participant Derek Shells, Dan Kruger, and Erno Komstamo had been the riders that were taken to the hospital for more examinations, but all three riders had remained conscious and stable throughout. The race had been called to a stop after the track became dangerous from the bikes and people, with Irish rider Michael Sweeney, Phil Crowe, and Didier Grams being the other members involved in the pile up.

The red flags had been displayed during the initial running of the event after Rob Hodson had crashed, and Mark Cerveny was not able to avoid the accident. Both had been reported to be injured from the collision, but it did force a 30-minute delays as teams were sent to clean up the fuel and water that had spilled out across the track.