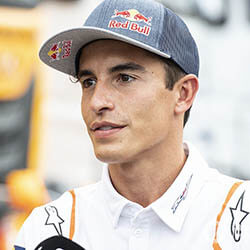 Multiple MotoGP World Championship title holder Marc Marquez could very well miss the start of the 2021 season following a third operation on his right arm. Marquez has not raced since fracturing his arm right at the beginning of the 2020 MotoGP season.

The operation, which was conducted in a hospital in Madrid and took eight hours to complete, was necessitated by a slow healing of the humerus bone, his Honda team has confirmed. The surgery involved the removal of the previous plate placed in his arm and the adding of a new one. Also surgically affixed was a bone graft taken from his hip.

Marquez attempted a return to racing only days after the initial surgery was performed on his arm. His attempt at a comeback was however aborted – leading to a second surgery to repair a plate shattered from his premature exertions. Though his team did not reveal how soon he would be able to return to MotoGP, a Spanish newspaper has alluded to the fact that Marquez will likely have to spend time away from riding until at least May 2021.

His ongoing absence is expected to open the door to a 2021 MotoGP season for former Ducati rider Andrea Dovizioso. Though initially headed into a planned year-long sabbatical in 2021, the promise of being offered the chance to ride for Honda will likely be too good a prospect to pass for Dovizioso.

The 2021 MotoGP season gets underway in Qatar on March 28.